Discover the conversion rate between different states of your funnel

Written by Cláudia Duarte
Updated over a week ago

The conversion funnel represents a lead's journey from top to bottom, making pipeline management fundamental in determining why leads succeed or fail in passing through the various stages of the funnel before sealing the deal. For that reason, we created the Product Conversion Report, which provides you with the current conversion rate between the different phases of your funnel. 〽️

➜ What is the Product Conversion Report for and how does it work?

➜ Where can I find the Product Conversion Report?

What is the Product Conversion Report for and how does it work?

The Product Conversion Report is essentially a funnel report, displaying the conversion rate between different stages of your funnel – in other words, what's your school’s success rate in moving people down the pipeline, such as how many applicants who submitted an application were accepted, how many accepted candidates got enrolled, and so on. It aims to facilitate the decision-making process for your lead acquisition and activation strategies.

This report is especially useful during an intake, striving to answer such questions as:

To generate the report, all you have to do is select a program, a class and the stages you wish to analyze, and a graph will be promptly produced disclosing the conversion rate between each state that you selected, for the intake you selected. 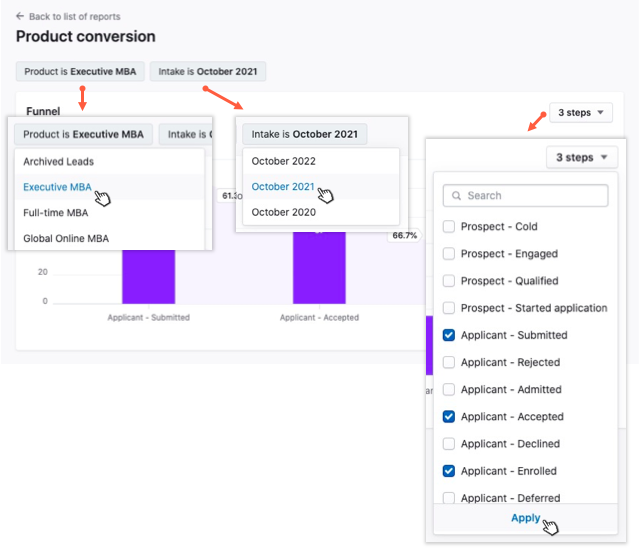 As can be seen below, one's presented the conversion rate between each selected state instead of between the first and the last one, which is why no percentage is shown between Submitted and Enrolled. In this example, 61,3% is the success rate in moving people from Submitted to Accepted, because out of 93 submitted candidates, 61,3% of them got converted to Accepted: 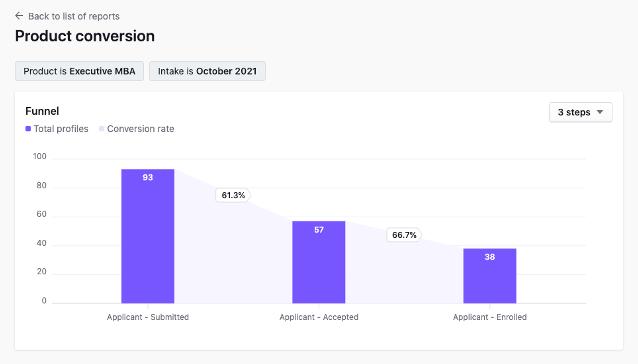 However, if you do want to see what's the conversion rate between only two stages, like from Submitted to Enrolled (for a more global perspective), simply return to the Steps selector and remove the intermediate states (in this case, Accepted):

Upon learning how successful or unsuccessful a given product is, you can reflect on the matter and take measures to increase the respective conversion rates and achieve better results. Since the Product Conversion Report doesn't feature targets, staff has to compare it against their team's or department's internal goals.

One thing that's extremely important to understand is that the values inside the bars, such as 93 and 38, are actually cumulative. They don't merely reflect the number of people associated with a specific lifecycle state, such as applicant::submitted or applicant::enrolled. Rather, the way the report works, by default, is that when you select a state – say, applicant::submitted –, it sums up all of the states downstream from it to the very bottom, resting on the assumption that the funnel consists of a linear logical sequence. 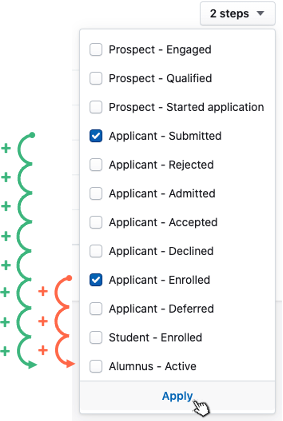 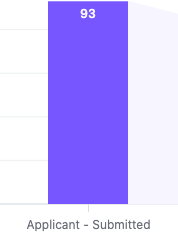 In the same manner:

This boils down to what makes sense in the context of a school's business logic and lifecycle evolution, so it's contingent on how you wish to calculate these values – meaning that you can contact us to request the permanent removal of certain lifecycle states from the report (such as, perhaps, applicant::deferred, since it may be a dead-end depending on whether you want to count deferrals as a conversion for the original intake or for the final one; an even better example is applicant::rejected, which is universally a dead-end).

Following the aforementioned train of thought, if, hypothetically, you did decide to exclude the applicant::deferred state, then it would be skipped in the sum: 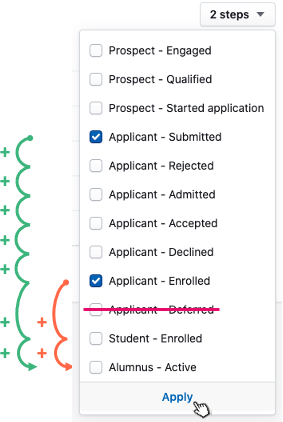 If this sounds a bit confusing, worry not – just get in touch with us and ask for help in understanding and setting up the report. 😉

Where can I find the Product Conversion Report?

There are two ways to access the Product Conversion Report. 🛫

1) Press Analytics on the sidebar and choose Reports 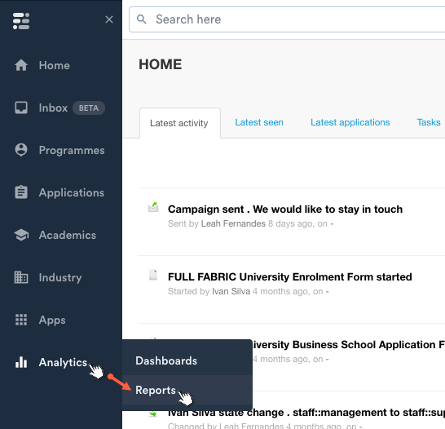 1) Click Programmes on the sidebar, select a program and then a class

2) Once inside the class, switch to the tab Conversion

You have reached the end of this article. Thanks for reading! 🤓 If you have any questions or comments on the topic at hand, or if you enjoy reads like this and have article requests, let us know. Also, please leave a rating below. Your feedback is highly appreciated! 💖

Did this answer your question?